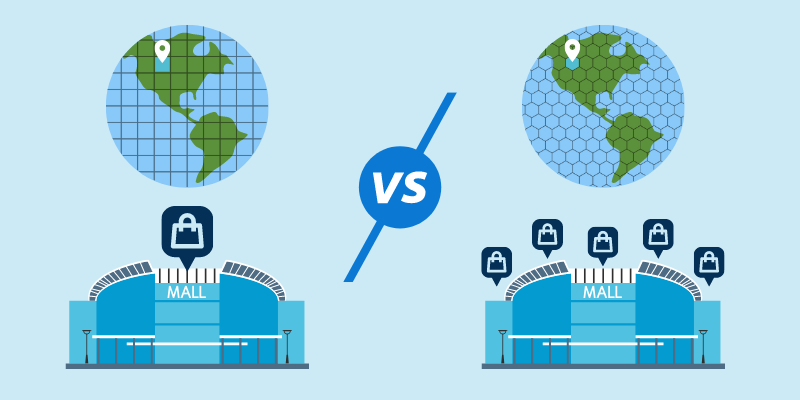 Traditional address mapping has a number of flaws: it’s easy for users to misspell addresses, there is no universal standard, and they are difficult to track and lookup based on their formatting. Having standardized address data will significantly increase the value of your data, but with street addresses, this is tedious and time-consuming.

Luckily, there are alternatives to traditional address systems that simplify location mapping, making it easier to share and lookup locations. Google Maps Plus Codes lets you map any place on Google Maps based on location coordinates; while Placekey lets you map multiple points of interest to a single address for easy lookup. We’ll compare both solutions by covering the following:

We’ll teach you what each of these solutions is best designed for, and compare the functionality so you know what is best to use for your needs.

Google Plus Codes vs Placekeys: which one is better?

Placekey are superior to Plus Codes because they are tokenized for easier recall, they use a hexagon rather than square grid system for more accurate data, and they enable point of interest (POI) mapping. Plus Codes integrate with Google Maps for ease-of-use, but Placekey is also open-source and accessible to everyone.

Have you ever been to a Starbucks in a Target, or a Subway inside a Walmart? Unless you're already shopping, these locations can be hard to find, as they will just show up as a street address on the map using traditional address systems. Even advanced address mapping systems like Google Plus Codes are unable to map points of interest at specific addresses.

This added layer (allowing you to map POIs) lets you create more complex location mapping systems, identifying multiple POIs at a single address. This also allows you to track the different POIs that have existed at an address over time.

Both of these structures mean that analysts can gain information about the proximity of two Placekeys or Plus Codes simply by looking at the makeup of the location keys.

Both of these systems give you information about the proximity of location keys to each other based on the makeup of their digits. Placekeys make this easier, as the location makes up its own portion of the location code. Plus Codes uses a single, long code made up of pairs of digits that each narrow down the location’s exact coordinates. With Placekey, there are three portions of code that each correspond to their own part of the Placekey: the location, the address, and the POI.

With Plus Codes, you need to use the entirety of the code to determine location (and it’s proximity to other locations). Using Placekey, these are separate, meaning you can easily compare the location (by grid) separate from the address and POI information. This parcing also makes it much easier to perform dynamic lookups by any of these individual variables.

How do location keys work?

Locations keys are designed to be uniform, standardized, and universal. This makes them extremely easy to work with, as they are less susceptible to the challenges of traditional addresses, such as misspellings and formatting errors.

This type of analysis is not possible with traditional addresses, as street addresses do not indicate their physical location within the address, as location keys do.

What are Google Plus Codes?

Google Map Plus Codes are location keys that leverage Google Maps to create an alphanumeric code that represents a physical location (by latitude and longitude). It is an open-source solution that is freely accessible, allowing the community to create add-ons and freely use and manage Plus Codes.

Plus Codes can be created for locations that already have an existing street address. These standardized location identifiers are easier to use and share with others, making address management simpler.

Even more helpful, location keys can be used to map location coordinates that do not have an existing street address. This can be critical for providing people and businesses with a way of mapping their location when traditional addresses are not available to them. This can give them access to deliveries, emergency and social services, and more!

Placekey is a universal identification platform that encodes physical locations (latitude and longitude) into alphanumeric Placekeys. These keys make it easy to map, find, and share location information as they use a standardized format that is not susceptible to spelling and stylistic mistakes.

These Placekeys also make it easy to encode point of interest, location, address, and other relevant information to this location key. Users can reference all necessary important information easily — from a single access point — so they don’t need to cross-reference different resources. With this type of information at your fingertips, you can make faster, more accurate, and more meaningful insights from your address data.

One of the most empowering features of Placekey is that it gives everyone the ability to map locations that do not — or cannot — have a traditional street address. Many of us take this for granted, but those who live in rural or less-populated areas struggle to gain access to deliveries, and even essential and emergency services. Mobile health centers that respond to natural disasters don’t have traditional street addresses either, making these difficult to find and integrate into a supply chain. With Placekey, these locations can be mapped, and even integrated seamlessly into an address management system.

At this point you’re probably thinking, “aren’t these both just location keys that simplify how I track and manage address records?” — and you’re not wrong. But there are still many differences between how these location keys are created, and the available functionality of each. We’ll dive into how they compare below!

Plus Codes vs Placekeys: mapping and managing locations using keys

Google Plus Codes work seamlessly with Google Maps, making it extremely easy to create and share Plus Codes. They are ideally suited for people living in rural areas that may not have access to a traditional street address. They can also be used by businesses to create a simplified address mapping system, reducing error and increasing accuracy of address data.

Placekey is great for mapping rural and remote areas as well, but unlike Plus Codes, Placekey also lets you encode point of interest (POI) data within the location key. This creates an added layer of specificity, allowing you to map POIs at a specific address (either at the current moment or across time).

Because of this, Placekey is also well suited for densely populated areas, and is typically used by businesses, while both Google Plus Codes and Placekey are great for mapping locations in rural and remote areas.

4 key differences between Placekeys and Plus Codes

Plus Codes and Placekeys are both location keys that offer a simplified, standardized address management system. Each uses an alphanumeric code to eliminate potential misspellings and style errors that are common with traditional street addresses.

Despite their similarities, there are a few main differences between Placekey and Plus Codes:

Let’s dive into each of these in further detail.

Map points of interest (POIs) at a single address

Unlike Plus Codes, which maps an address at a location, Placekey maps a point of interest, at an address, at a location. This added layer allows Placekey users to map multiple POIs at a single address.

For example, there could be two virtually identical addresses (123 Main Street W and 123 Main Street N) that are easily mixed up, resulting in delivery errors, billing issues, or flaws in your analytics. Placekeys, which use a standardized address format that is not as prone to error, make it more difficult to make these errors.

With all of this information encoded using a standardized Placekey, users can lookup any address using Placekey, and see all existing Placekeys with that address, no matter what their POI is. This lets you identify all existing (and previously existing) POIs at a location. By having this information readily available in a single place, with additional location information, you can observe more meaningful insights about these POIs, addresses, and locations.

Plus Codes use a series of square grids to divide (and subdivide) the world. This grid uses an alphanumeric system much like a chess board (A - H on one side and 1 - 8 on the other side). Each square is then further subdivided using the same grid to narrow down your area of focus to a specific location.

Alternatively, Placekey uses H3, a hexagonal hierarchical spatial index used by Uber. This hexagonal grid is a better method of dividing the world for location data for a couple of reasons:

First, a square grid doesn’t accurately divide a spherical object (like the Earth), and is better suited for a flat object. Alternatively, a hexagon is ideally suited for dividing a sphere with greater precision and accuracy.

Second, the H3 method is better for gaining a more comprehensive view of all information there is to be understood about a POI, as the edges are equidistant from the centre of the hexagon. This means you can learn more about locations based on their proximity to other locations, and do so faster and with greater accuracy.

Formatting is easy to remember and recall

As you narrow down your location to a grid, the letter and number for that square makes up the first two digits of the Plus Code. That more narrow location on the map is then further subdivided (using the same grid). The result is a single, long Plus Code that identifies an exact location (based on latitude and longitude).

Conversely, each Placekey is broken down into a number of different components (with corresponding digits that reflect that component of the Placekey). These components are easier to remember by the average person, as they tokenize information for easier recall. The most common example of this is phone numbers, which use a standard character count of 7 digits, and tokenize information into segments for easier recall.

Placekeys are designed for simple indexing and lookup

Plus Codes are a single, long location key. While these can still be input in portion for lookup, it’s more difficult to do because you have to break these down yourself.

Since Placekeys are broken down into subsegments, they allow for more dynamic lookups, as you can search for different components separately. As they come segmented, it’s much faster to break them down into their components when viewing them. A Placekey consists of a what@where, which is further broken down into 3 digit parts (one for the address, one for the POI, and three for the location).

As a Placekey can be subdivided into parts, it is easy to index, which makes recall and lookup easier and faster. For example, if you want to lookup all of the POIs at a specific address, you can search the address and location portions of the key, and view all Placekeys that match, showing you all POIs that are mapped at that address with Placekey.

Both Google Plus Codes and Placekey are standardized location identification systems that are designed to be universally accessible and simple to use and share. These location keys are ideally suited for mapping rural locations in rural areas, where people may not have access to a traditional address.

Placekey offers an added layer of functionality, as they encode points of interest, enabling multiple POIs to be mapped to a specific address. Placekey is better suited for dense areas where you will need to map more than one POI at an address, or manage a complex system of address data.